Former First Lady Michelle Obama and some other famous friends will launch a new voter registration nonprofit called When We All Vote.

In addition to the Hamilton creator and the first lady, the co-chairs of the national nonpartisan organization include actor Tom Hanks, country music stars (and spouses) Faith Hill and Tim McGraw, basketball player Chris Paul and singer-songwriter Janelle Monáe.

Through extensive social media and digital outreach, the national organization aims to increase the number of eligible citizens who register to vote and who actually show up to the polls on election day.

The launch video shows Obama and Miranda personally making voter registration calls, reminding the other co-chairs to vote in every election, “school board, state house, all of them,” Obama instructs.

“Voting is the only way to ensure that our values and priorities are represented in the halls of power,” Obama says in a statement in When We All Vote’s press release. “And it’s not enough to just vote for president every four years. We all have to vote in every single election: for mayor, governor, school board, state legislature and Congress. The leaders we elect to these offices help determine just about every aspect of our lives and our democracy. So the future of our families, our communities and our country belongs to those of us who show up, cast our votes, and make our voices heard.”

When We All Vote aims to increase voter registration rates in all 50 states hoping to make waves in a political landscape where registration rates are low. In 2014, more than 1/5th of eligible American citizens were not registered to vote, according to the Pew Charitable Trusts research cited in the press release.

When We All Vote is embracing a three-pronged strategy to achieve its registration and participation oriented goals: volunteer recruitment; improved voter registration processes; and increased conversation across the United States. This approach will involve recruiting on-the-ground people and organizations in all 50 states, and extensive social media and digital outreach. When We All Vote is also partnering with corporate, education and civic institutions to reach voters nationwide, according to the press release.

“Voting is a small act that proves that we are a democracy a government of the people and by the people. It’s up to each and every one of us to make sure our government doesn’t just represent a small some not just the most powerful but all of us. When we all vote, we are making strides toward a more perfect union,” Hanks says in a statement.

Monáe adds in a statement, “It’s gonna be our generation that corrects the mistakes of our past and creates a more inclusive future that works for us all. As voters, we are the ones that hold the power to make this dream a reality.”

Starbucks will close all its company-owned stores in the U.S. during the afternoon of May 29 in order to give racial-bias training to employees, an outgrowth of the incident involving two African-American men at one of its coffee shops in Philadelphia last week.

The anti-discrimination instruction is “designed to address implicit bias, promote conscious inclusion, prevent discrimination and ensure everyone inside a Starbucks store feels safe and welcome,” according to the company announcement made on Tuesday. 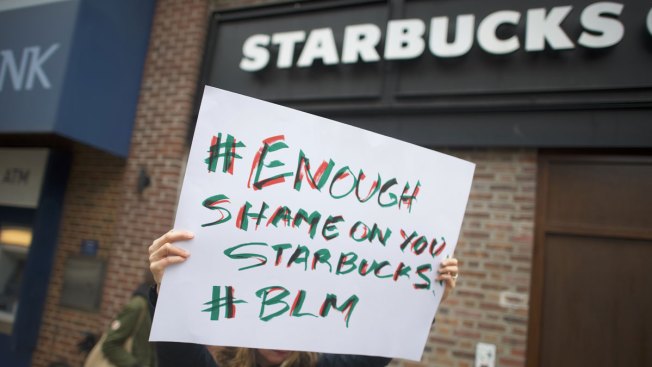 The Seattle-based chain has come under fire after staff at one of its Philadelphia locations called the police on two African-American men when they didn’t buy anything and asked to use the restrooms. The men were told restrooms were only for paying customers only and they explained they were waiting for a friend, who later arrived. Police arrested them, though Starbucks didn’t press charges.

The CEO apologized for Thursday’s incident and on Monday, the coffee giant confirmed that the Philadelphia employee who called the police is no longer with the company.

Check out the video below of the incident.

There are more than 8,000 company-owned Starbucks restaurants in the country, employing close to 175,000 people, the company said.

“While this is not limited to Starbucks, we’re committed to being a part of the solution,” CEO Kevin Johnson said in a statement. “Closing our stores for racial bias training is just one step in a journey that requires dedication from every level of our company and partnerships in our local communities.”

The curriculum will be developed with help from national and local experts, including former U.S. Attorney General Eric Holder; Sherrilyn Ifill, president and director-counsel of the NAACP Legal Defense and Education Fund; Bryan Stevenson, founder and executive director of the Equal Justice Initiative; Heather McGhee, president of the public-policy public policy organization Demos; and Jonathan Greenblatt, CEO of the Anti-Defamation League.

According to Starbucks, the panel will also help review “the effectiveness of the measures” the company undertakes.

“Earlier this week, Starbucks began a review of its training and practices to make important reforms where necessary to ensure our stores always represent our mission and values by providing a safe and inclusive environment for our customers and partners,” the company said.

According to Starbucks, the racial-bias training materials will be made available to other companies to use.

The chain has more 25,000 stores around the world.

The U.S, U.K and France have fired missiles to Syria In Douma in response to the chemical attack caused by Assad Regime. The U.S launched more than 105 Missiles and hit all three targets successfully.

Defense Secretary James Mattis said, “a little more than a double” Weapons were used compared to last year 2017 in which only 59 Tomahawk Missiles were involved.

“We were very precise and proportionate, but at the same time it was a heavy strike,” Mattis said.

“A perfectly executed strike last night. Thank you to France and the United Kingdom for their wisdom and the power of their fine Military. Could not have had a better result. Mission Accomplished!”

A perfectly executed strike last night. Thank you to France and the United Kingdom for their wisdom and the power of their fine Military. Could not have had a better result. Mission Accomplished!

According to a Defense Department, the attack involved munitions fired from naval vessels and aircraft’s which included 100 tomahawk cruise missiles.

Satellite Images of the before and after were shared by  ISI Image Sat International with Fox News. The photo taken Saturday shows the main buildings destroyed.

The U.S has been distressed hoping that Russian soldiers were safe. Days before the Missiles were fired, The US military claimed they would notify Russian counterparts of possible target before a strike. In last year’s airstrikes, Russia was given an advanced warning. This year the U.S did not communicate with Russia about the strikes on Syria. Russia has bases and soldiers in Syria. The miscommunication and injury of any soldiers may lead to a conflict between Russia and the US.

Newly released video captures the moment three Queens police officers carried a 91-year-old woman down a smoke-filled hallway — before they dumped her body and left her behind.

The footage is part of a legal notice of claim set to be filed by the family of great-great-grandma Ethel Davis, who died of smoke inhalation a day after the fire back in January.

The footage shows the feeble, bewildered woman, in a nightgown and socks, being hauled off by NYPD Sgt. Timothy Brovakos, who is aided by two other cops, at around 11:30 a.m.

But Brovakos is quickly overcome by smoke, and Davis gets abandoned on the floor outside a hallway exit door as his two comrades help him to a lower floor.

Firefighters are seen arriving on the floor about a minute later, although it doesn’t appear that they notice Davis because of the smoke.

It may have taken as long as five minutes for Davis to be taken to a lower floor to safety, the video shows.

“When you look at the video in a bubble, it looks like they’re being heroes,” Peter S. Thomas, the family’s lawyer, said of the cops.

“But you need to look at the big picture: They’re already violating protocol by attempting this evacuation.

“At each and every step, the officers on the scene did precisely the wrong thing.”

Cops responding to the blaze left open the stairwell door on the 12th floor where Davis lived, Thomas said.

That, he said, allowed smoke from the fire — ignited by a tipped-over halogen lamp in an apartment on the 11th floor — to fill the upper floor’s hall.

Cops also were forcing residents of the fireproofed building to flee. That is against NYPD and FDNY protocol, given the construction of the building.

Davis’ daughter Marcia has said she and her mom begged the officers to let them stay inside the apartment.

“I told them she’d been safer in the house with the door closed and that she wouldn’t survive in the hallway,” Marcia Davis told The Post on Monday.

“When I got to near the stairwell, I saw her on the floor. I said, ‘Mama, what you doing here? Why they leave you here?’ I stayed with her as long as I could. It got so black, I was choking.”
Marcia said she watched the video for the first time this past weekend.

“It was very sad. It was horrible,” she said.

Brovakos’ lawyer has said that when the sergeant recovered, he risked his life again to go back to get Davis.

The Davis family’s notice of claim is a precursor to a lawsuit and targets the NYPD, city and Brovakos and the other two cops, among others.

The NYPD has said it was conducting a “major investigation” into the incident.

Check out the video below.