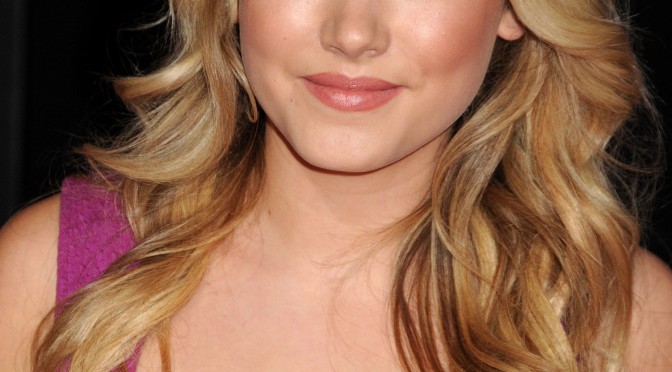 “I would like to just be known for making people laugh, helping people escape their everyday lives” -Taylor Spreitler

Taylor Spreitler is a talented young actress/model who is staying positive and exploring new ventures in her acting career. Spreitler has been quite busy this year with her role on the hit television comedy, “Kevin Can Wait” and now looks forward to her role in the upcoming horror film, “Amityville: The Awakening”. The young actress who was pretty much laidback during the interview, displayed her southern charm by telling us that she is simply into making others laugh and enjoying life! You can definitely tell that she is calm and confident about her career and making sure to enjoy every moment without stressing.

Kontrol had the opportunity to sit down and get to know more about Taylor Spreitler and what the actress has in store for the upcoming year.

It’s not often that any young woman can say they had the chance to star on the popular soap opera “Days of Our Lives”. For many of us who sat home and watched the soaps with our parents and grandparents, it was about the closest we would ever get to the actual set. We asked Taylor what the experience was like for her to star on such a popular television series.

“It was great, the fans were amazing! We would have these huge Days of Our Lives events where people would come that had started watching it with their grandparents and that was something that would last for generations. It was awesome!”

The multi-talented actress has definitely had a promising year and we were curious to know what projects fans could be sure to keep up with her in for the upcoming year.

“Well, ‘Kevin Can Wait’ is airing now up until early next year….I also have a movie called ‘Amityville the Awakening’ that is coming out in January.

In the comedy television series, ‘Kevin Can Wait’, Taylor plays the daughter (Kendra Gable) of Actor/Comedian Kevin James. The show is about (Kevin Gable), a newly retired police officer who looks forward to spending more quality time with his wife and three kids only to discover he faces much tougher challenges at home than he ever did on the streets. The show airs every Monday on the CBS network at 8/7c.

Horror fans all over can definitely get excited about Taylor’s upcoming role in the seventeenth installment of the Amityville saga, “Amityville: The Awakening”.

The movie depicts that when some footage dating back to 1976 is discovered, the case of the haunted house in Amityville is reopened. The film is scheduled to be released on January 6, 2017. Spreitler who plays a friend to the character Bella in the movie briefly expounded on the excitement of working on the set of the popular horror film.

“It was a lot of fun, I got to work with amazing people so it wasn’t really like work. I had a lot of fun shooting it and I’m just excited for people to be able to see it finally!”

With the actress starring in hit television series, we know that mainly every actor/actress has definitely made a list of some ideal actors who they would love to work beside. Spreitler happily responded, “I’ve been lucky on the show, ‘Kevin Can Wait’, with the people that I’ve worked with like Kevin James and Ray Romano. I’ve been pretty lucky to work with a lot of people who are on my list.”

While staying busy with her role on the television series and movie sets, Taylor states that her role on ‘Kevin Can Wait’ has definitely aided in her growth as an actress.

“Just doing comedies helped me out a lot, working with comedy geniuses, like right now Stand-up comedians such as, Kevin James, Gary Valentine, and Chris Roach…like I work with great amazing people so I feel like I’m constantly learning and that’s what I love about my job. You’re kind of always evolving.”

Being such an accomplished young actress, the media is always looking for ways to shine either some good light or bad light and Taylor expressed how it felt to be in the spotlight.

“The positives are that we are given this voice and this amazing platform where we can project things that we care about and things that are close to us…we have a broader reach. Everything you do in your personal life is out there for people to judge so that’s probably the hard part. Like my friends and I who grew up in this industry…We are kids and we make mistakes just as other kids but because we are broadcasted out there…we get scrutinized a lot for it.”

Those are areas that can often be tough for any actor who is working hard to keep the fans happy as well as build a prominent career for themselves.

Taylor shared with us that if she had the opportunity to change some things about this world then it would simply be to remove bullying from society. Whether you are an actor, a student or just a regular person trying to improve your life, Spreitler feels that bullying others is just not a cool thing to do.

“I mean I just wish people would accept people for their differences…just be nice.”

Spreitler went on to add that if she was ever to be remembered for anything in her acting career then it would simply be making people just laugh.

“I would like to just be known for making people laugh, helping people escape their everyday lives and just be able to sit down and laugh a little bit from something I did.”

Taylor Spreitler is definitely a promoter of positivity in her life and the lives of others. Outside of acting she is truly the display of a bright young lady who is focus, believes in laughter for the occasion and has a very promising career ahead of her.

Be sure to keep up with the amazing Taylor Spreitler on the television series ‘Kevin Can Wait’ and catch her in the upcoming movie ‘Amityville: The Awakening‘ which releases on January 6, 2017.