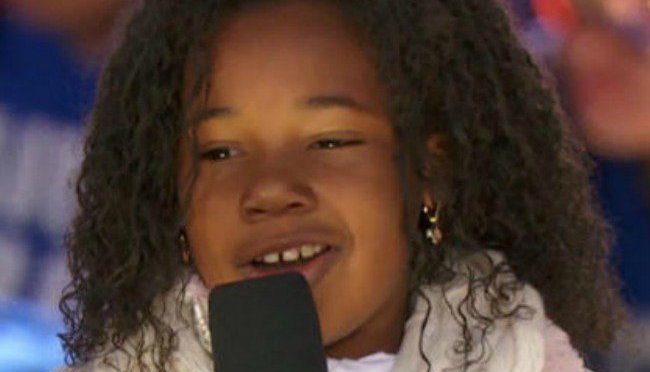 “My grandfather had a dream that his four little children would not be judged by the color of their skin but by the content of their character,” she said to a while referencing MLK’s famous “I Have a Dream” speech, which he also delivered in D.C. “I have a dream that enough is enough, and that this should be a gun-free world. Period.”

The young activist also led the protestors in a chant: “Spread the word, have you heard, all across the nation, we are going to be a great generation.” Then, when they got the hang of it, she challenged them to “say it like you really, really mean it and the whole world can hear you.”

The D.C. rally, March For Our Lives, is just one of around 800 protests going on around the world. The protests were sparked by survivors of the Valentine’s Day school shooting at Marjory Stoneman Douglas High School in Parkland, Florida that left 17 dead. One of the survivors is 17-year-old, Jaclyn Corin, who stood and held Yolanda’s hand on stage as she gave her powerful speech.

Check out the video below.