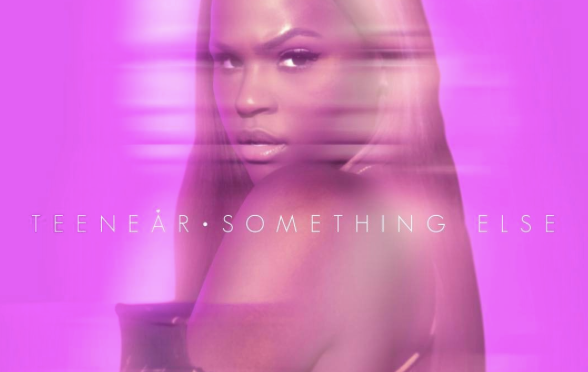 Teenear releases her original new single “Something Else”, all in the midst of her Travis Scott, “Goosebumps,” cover buzzing all over the web. “Something Else” was produced by Grammy nominated producer Velous, after taking a break from working with Billboard artists like Jeremih; Velous teamed up with iHeart tour performer, Teenear, to create another smash. “Something Else” is an up-tempo R&B song, that describes meeting someone unexpectedly and discovering new things in life and love.

“It’s about that one person who came into your life, made such an unexpected impact, that now you can’t let them go. Their presence made you do and feel things you haven’t felt before.” – Teenear

“Something Else” kicked off with a VIBE magazine premiere and is sure to carry us through the summer. Fans can catch the Slip-N-Slide artist, performing in May, as part of the Rolling Loud tour, alongside Kendrick Lamar, Future and more. As for now, enjoy her new single and please share.

Slip-N-Slide Records recording artist Teenear is carving a lane of her own. The Miami native began singing at the age of 3 and honed her craft through participating in pageants, talent shows and in church. With her sights set on singing, dancing and acting, she is poised to be Miami’s next breakout star. At 15 the singer took her parents’ advice and uploaded a performance cover of Rihanna’s “Stay” to her YouTube channel and began creating a buzz. She kept the momentum going with a cover of Meghan Trainor’s “Like I’m Gonna Lose You,” which left quite the impression on the star herself.

In 2015, she released her debut single; “Friday Night” featuring rapper Sage The Gemini, then followed up with the mid-tempo “Streetlights” in 2016. “Friday Night” went global when Japanese dancer Kahonna used the song for a choreography video and “Streetlights” received a dancehall inspired remix featuring rapper Trina in the fourth quarter of 2016. The two releases display the singer’s progressive growth that only continues with the new music that she is preparing to release.

Teenear kicked off 2017 with “Last Night,” a breakup anthem that that fuses R&B with bounce and kept the momentum going with the Velous-produced “Something Else.”

“I love R&B because it’s just so much fun to sing,” says Teenear. “I will always keep some of that close to my heart, but my lane is a mix between urban and pop.”

Jim Jonsin, Marley Waters, Stereotype and Lamb are among the producers that she is currently working with. Yearly, she teams up with Miami-Dade County Commissioner Barbara Jordan and the Ted Lucas foundation for their annual turkey giveaway. Her philanthropic efforts also include visiting the Miami Children’s Hospital and working with the American Cancer Foundation. With influences that include trailblazers like Mariah Carey, Brandy, Aaliyah and Beyoncé, her vocal prowess and a positive image that is reflected in her music. She can be seen performing as a part of iHeart’s Juice High School Tour as well as the 2017 Rolling Loud Festival in Miami. (bio source: teenear.com)