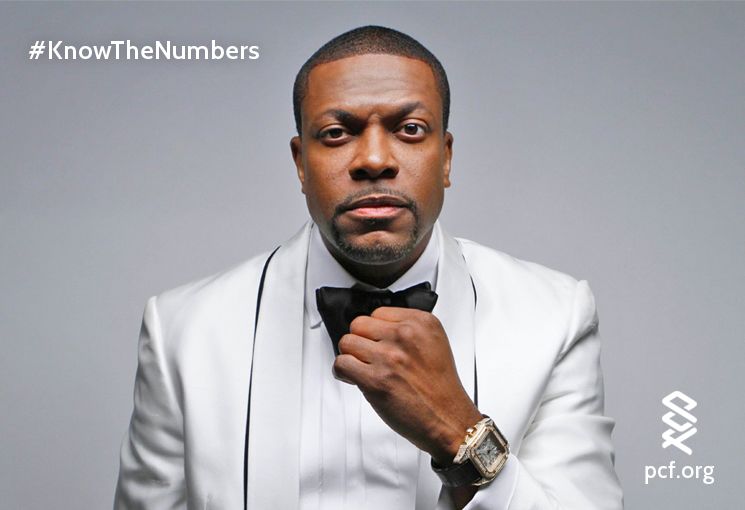 Actor, Comedian and Humanitarian Chris Tucker (Rush Hour) recently joined the  National Minority Health Month initiative as a spokesperson to raise awareness about the significant disparities that exist between men of African descent and other ethnicities as well as raise awareness about risk factors associated with the disease.  The PCF, along with Tucker, is encouraging men to “Know the Numbers” by visiting pcf.org/knowthenumbers to view and download a series of important stats and vital information every man of African descent should know.

Each year, three million men in the U.S. battle prostate cancer – one in nine will be diagnosed.  African-American men are 74% more likely to develop prostate cancer in their early 50s and 2.4 times more likely to die of the disease. There are a number of factors contributing to this issue including access to quality medical care, issues of physician mistrust and genetic predisposition. Data also shows that black men are less likely to be advised about cancer screenings and less likely to undergo surgery or chemotherapy.

“It was shocking for me to learn that African-American men have the highest death rate and shortest survival of any racial and ethnic group in the U.S. for most cancers and that prostate cancer is the number one diagnosed cancer among veterans,” said Chris Tucker.  “It’s imperative that the black community understand the risks and do as much as possible to increase their chances of surviving or even better, preventing the disease by making certain lifestyle changes.”

This is one of the most important problems PCF is addressing in global oncology,” said Jonathan Simons, MD, PCF’s President and CEO.  “PCF is devoted to tackling these alarming disparities.  We are doubling down on cutting-edge research and forging new partnerships to solve the most lethal

forms of prostate cancer and to identify causes of why African-American men are disproportionally impacted by aggressive disease.”

A decade has passed since Jackie Chan and Chris Tucker last shared the screen together, but it appears fans are now finally closer than ever to a Rush Hour 4.

The veteran film actor shared the exciting news during an appearance on Power 106’s The Cruz Show, where he confirmed years and years of rumblings that he’d given the green light on expanding the action-comedy franchise.

“For the last 20 years, I’ve tried different characters,” Chan shared. “A few years ago, Karate Kid. There was supposed to be a Karate Kid 2 but the script isn’t right. Several years later they want to do it and I say, ‘You still want to do Karate Kid? No, Karate Men.’ They’re taller than me now!”

He added, “Rush Hour you can do any time… Next year!”

Chan added, “The script probably at the end of this month will have a second draft and next year, we’ll probably start.”

The comedian and second half of the Rush Hour duo has yet to comment publicly on whether or not he’s on board with a fourth film, but Jackie said his decision will most likely come down to scheduling constraints.

“It’s not about money!” Chan assured. “It’s about having the time to make. Otherwise, Rush Hour 4 we’re all old men. I tell Chris Tucker, ‘Before we get old, please do Rush Hour 4.'”