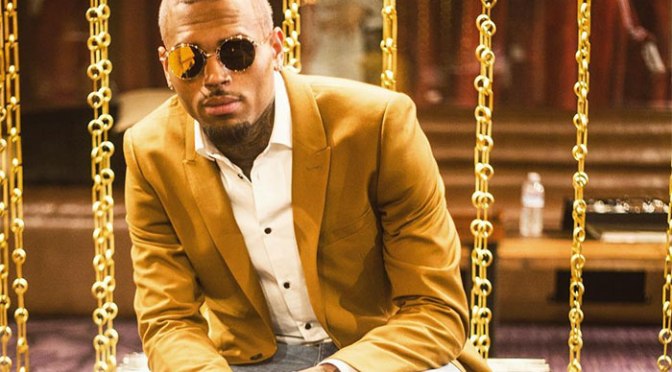 Just after the release of his 45-track album, Chris Brown is back at it in the lab teasing a new Michael Jackson-inspired song.

He recently shared on his Instagram a preview clip, Breezy captioned the post writing: “VAMPIRE VIBE session MJ kinda night,” while filming a studio mixing board.

“Girl, I’ve got a bad, bad reputation, but you do too,” he sings. “She said she’s been down, down for a while now / She’s a renegade on the loose.”

The production is where Brown appears to be pulling his MJ reference from, as the track sounds inspired by Jackson’s “Leave Me Alone” from 1987’s Bad.

Of course Chris Brown’s inspiration and love for Michael Jackson is no surprise. He’s shared his admiration for the King of Pop numerous times, and in 2012 he reflected on meeting his idol. “That was probably one of the greatest moments in my career ’cause I got a chance to perform for him,” he explained. “People loved the performance. I went backstage and met him. He said hi to my mom. He was respectful. It was just one of those great times in my life.”

Listen Below to ‘Sirens’ by Breezy!

Chris Brown is back at it with this sultry, sexy single! He’s looking for some good loving and of course some privacy! The track which was released Friday (March 24),  is rooted with production by D.A. Doman with Brown singing of a lady’s special presence.

“I’ma slow it down, ’cause ain’t no speed limit/When we’re moving at the speed of sound/We gon’ turn all the way up when the lights down/Why your pussy so damn good, miss lady?/Go and put that booty up, baby, one on one/You know I’ma go crazy when your legs in the air”

“Privacy” will be featured on Breezy’s upcoming album, Heartbreak On A Full Moon!

Karrueche Gets Restraining Order, Says He Threatened to Kill Her!

In late January, a video of Chris Brown emerged in which he admits he might stalk you if he once dated you. Now, Karrueche Tran has a restraining order against C. Breezy and says he threatened to kill her.

Chris Brown has been ordered to stay clear of ex-GF Karrueche Tran, after she filed legal docs saying he vowed to kill her and he’s beaten her up before … TMZ has learned.

Karrueche claims in a sworn statement to the judge, earlier this month Chris “told a few people that he was going to kill me.” She then says Chris told the friends if he can’t have her then no one else can, threatening he was going to “take me out” and “threatened to shoot me.”

Karrueche also says several years ago Chris “punched me in my stomach twice,” and “pushed me down the stairs.” This would have been during the time Chris was on probation for the Rihanna beating.

The legal docs also claim Chris has threatened to harm her friends and even recently threw a drink at one of them.

She worries he’s now putting action behind his words, and that’s why she got the restraining order. A few weeks ago Chris posted this video, which tracks with Karrueche’s claim Chris was telling friends if he couldn’t have her no one could.

Though Brown hasn’t specifically responded, he did take to Instagram on Tuesday to address the “bulls–t.”

“Make sure ya’ll don’t be listening to all this bulls–t, man. What all them other people on the outside doing, let them do what they doing. I don’t know what the f–k they talking about.”

He also noted that he won’t be going through with the Soulja Boy fight, a feud that started when the “Crank That” rapper liked one of the model’s photos.

“I boughted out of this Soulja Boy fight,” he told his Instagram followers. “It was a legit thing on a positive scale. All the wrong people got in the way, the middleman people got in that way…because they wanted to get a piece of the pie. It’s immature, first and foremost.”

“Second of all, ain’t no n—a ain’t ever going to hold me up. So however anything goes, this is how we’re going to rock it: he gon’ to see me, he gon’ see me. I ain’t out here moving nothing crazy, but just don’t believe any of that bulls–t, man, I’m out.”

We have no idea what’s going on with Breezy but let’s keep him in prayers because his heart is obviously still deeply involved with Karrueche.