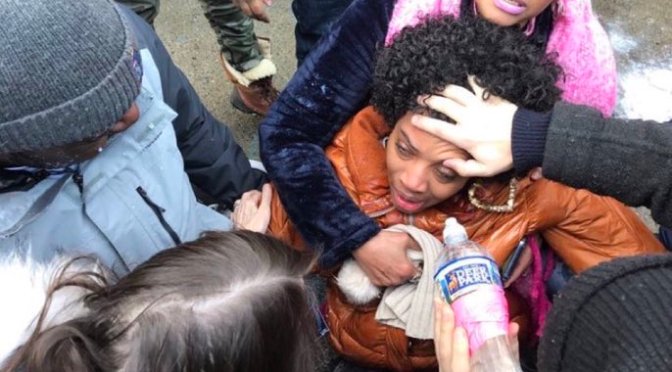 During the protest, which was broadcasted live on her Instagram account, she would correspond with the inmates by telling them to bang on their windows as she asked questions. When she asked if they had not received their blankets, the banging was heard loud and clear. When she asked if the heat had not been cut on, they banged, which let us know they were still freezing.

Smith, who was visibly emotional, was outraged at reports from the New York City Mayor’s Office that the inmates were sent blankets and hand-warmers while temperatures were below freezing. The inmates confirmed that they had not received anything. The MDC has been without heat and electricity for about a week, putting inmates are risk for serious health issues. The New York Times noted that inmates with sleep apnea cannot use their sleep machines because there is no electricity, putting them at risk for a stroke. Without electricity, the inmates can’t call their loved ones nor can they request refills for their medication. They also can’t use their toilets and there’s no hot water. Visiting hours have also been canceled. This jail houses over 1,600 men.

This matter hits close to home for Smith, whose husband Mendeecees Harris is currently incarcerated on drug related charges. Smith was also hurt during the protest according to a video that was posted by her close friend.

You see what the guards did to my sister @yandysmith. World we need your help. They trying to kill us out here!! Shut MDC down. None of us are considered human to them!!

This is what happened to my Sis @yandysmith. Officer C. Garcia along with Officer T. Dodson at the Metropolitan Detention Center brutality assualted Yandy Smith and pepper sprayed her for no reason. . . This is the culture of the staff at MDC. Can you imagine what they are doing to the inmates? #enoughisenough #changemustcome #occupymdc #itsgoingdown