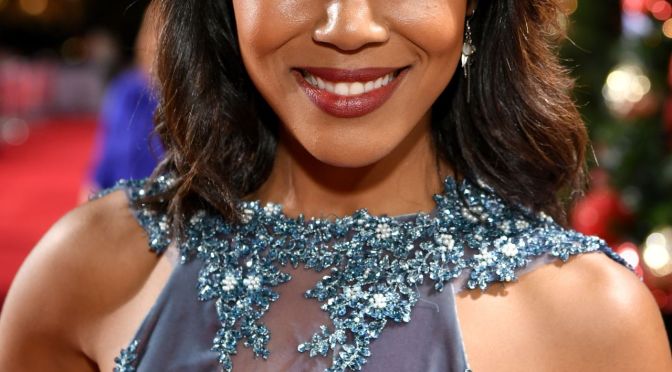 “I love that America has given me a chance to shine and do what I love.” Rachel Kylian

Actress Rachel Kylian definitely keeps herself busy these days with her acting career and her most recent appearance in the holiday film, ‘Almost Christmas’. Kylian plays the younger version of Grace Meyer in the film.

Rachel enlightened us on her many travels, as well as her multicultural experiences from around the world. Kylian displayed the beautiful & confident spirit of a strong intelligent woman who is truly grateful for the opportunities she has been granted along the way. We had a wonderful time speaking with her and you can definitely expect some great things in the future from the talented French Actress.

So how did it feel to be part of such an amazing holiday film like, Almost Christmas? Well Rachel Kylian gave us a joyful response on being able to join this amazing cast.

“It is a great honor to be part of this project because it is a very big movie for me. It’s a Christmas movie, it’s a family movie, and it’s a comedy picture. I’m very happy that I am part of this project especially since it’s coming out around Christmas and it is a Christmas story that everyone will go and watch. This is a very great time for this movie to be out because it is a family movie and everyone should go see it.”

Movies that are crafted for this time of the year are definitely memorable films and often hard to gain roles for when it comes to auditioning. However, the talented French actress was able to share with us how she gracefully gained the role for this amazing holiday film.

“I heard about the part from my agent so I went out to audition for it. After reading the part I felt it was for me; they loved me and then I got a call back. It was a lot of call backs and they finally gave it to me. It was a long casting process but I eventually got the job and I was very happy.”

Rachel joyfully went on to share with us that the role was truly exciting. Her ability to relate personally to the character she played in the film made the role easy to relate to. Kylian even gave some detail about how much strength her character meant to the Meyer family in the film.

“The character I play is the mom, Grace Meyers, and she is the backbone of the family. She loves her children and they all become successful. She teaches them very good values. She loves her husband and she loves cooking for the family and having family dinners. Then something happens to her and the husband tries to bring the family back together. My character is the center of the movie because everyone loves the mom. When I first read her character I just loved it because I actually cook in real life and it was easy to play. I was excited to also play beside Danny Glover.”

As with every family during the season of giving and love, there comes some good and bad moments. We asked Rachel what we could expect to observe about the Meyer family in the film, ‘Almost Christmas’.

“This family is dysfunctional since the mother passed away. Everyone is trying to do things on their own. Rachel Meyers is trying to become a lawyer but has financial problems, she has one kid who is a bit of a nerd. There is also Evan who is a football player but with the mom gone he is losing it. Cheryl is married but her husband is a cheater and she continues to try to fight for her marriage despite being unhappy. Rachel & Cheryl are two sisters that don’t get along. Christian is successful with a kid and wife. It’s interesting with seeing them try to become a family with all of the personal problems. Grace’s sister played by Monique tries to bring the family together. She is very funny and doesn’t take no for an answer. She controls the house. Everyone is going to find themselves in this movie whether it’s the kid, aunt or uncle. It’s a very nice cast and they were fun to work with.”

Outside of being on set of the film, ‘Almost Christmas’, the lovely actress shared other projects that we can expect to look forward to in the upcoming year.

“Currently I am working on MacGyver, which is a remake to the old classic and on it I play a German assistant. It aired a couple of weeks ago and I’m looking forward to that. I am also working on a future film called, ‘Interpreters’, which will come out soon and it is an action film, in it I play a doctor. I also do voice overs and I speak 4 languages so I get to work on a lot of films. This year I worked on Criminal Minds and I also did a film called ‘Red Hot’, which is on Amazon. I am also hoping next year that we can do a sequel to ‘Almost Christmas’.

Rachel Kylian is not new to the stage.

She began her early years involved in modeling as well as theater. She shared with us how she came into the field of acting as well as her passion for the art.

“When I was young my mom put me into a lot of classes. I did ballet at seven and discovered that I loved to perform. I also did theater at the age of twelve in France & Africa. I always loved to be on stage and perform and act. I got into arts very young. For me modeling came out of the blue, I tried it and did my first runway when I was sixteen. I also did beauty contests.”

“When I came to America at about seventeen, a friend of mine invited me to try acting and so I pursued it. It was my dream to perform. Art was always in my heart; I did film and commercials. It’s been a long journey, and being in front of people was a natural thing. I’m a black French actress and I love that in America you have a chance. I love that America has given me a chance to shine and do what I love.”

Rachel Kylian is very diverse and brings that je nais se quoi to the stage! She is unique and yet able to relate to her roles naturally because of her experience. When speaking with her about all of her many travels and involvement with the arts across the world, it is very obvious that she knows how to handle the spotlight. Kylian is an amazing woman who delivers that natural ability to connect and play any role that she is presented with. We are looking forward to seeing her in the holiday film, ‘Almost Christmas’ and we hope that everyone makes plans to go see it along with their family.