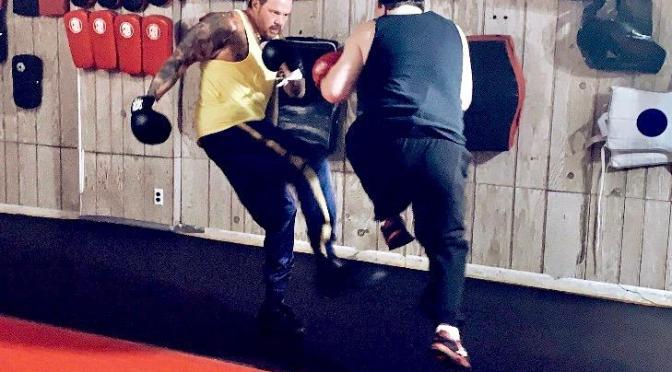 A tip was received that actors Paul Mormando and Ciro Dapagio got into a shoving match on the set of the new Mob series Silent Partners. During a shoot of Silent Partners actor and director, Ciro Dapagio was doing a sparring session with Action Star Paul Mormando when things got so physical that the two started pushing and shoving after a take. Another actor Garry Pastore (star of  HBO’s The Duece) had to step in. Eventually, things cooled down and the scene was finally shot.”

Set in 1980’s South Florida, SILENT PARTNERS tells the unbelievable and compelling true story of Good E-Boy Insurance, which served as a front for a Mob-run operation, and how the business went rogue when it partnered with an outlaw mafia member, who just so just happened to be Cosa Nostra royalty and a member of the Sicilian Mafia.

SILENT PARTNERS began shooting on location in Miami at the end of May and the powerful series also stars Garry Pastore (The Deuce) as Dave Iacovetti and Joseph Donofrio (A Bronx Tale) as Dave Jr. Ronnie Marmo (General Hospital), James Russo (Django Unchained, Donnie Brasco) and Antoni Corone (We Own the Night) round out the ensemble.

Paul Mormando is more accustomed to playing the hero in his projects. However, he welcomes the challenge and intrigue that comes with taking on a role that is far darker than what he’s used to, in portraying a real-life gangster. Mormando says “I am really excited to expand my acting range and take on a role that is not the norm for me, especially to be surrounded by such a great ensemble cast.”

Creator Ciro Dapagio managed to catch the eye of well-respected showrunner Pat Andrew, a former executive of Spelling Entertainment. Andrew partnered with Dapagio coming hot off the success of his YouTube web series The MobKing, which won Best New Web Series and Best Lead Actor at the Annual Widescreen Festival in 2018.  Dapagio, himself, is a unique figure in the entertainment industry, as a former member of organized crime in Florida who, then transitioned into life as a writer and actor after being released from prison. Dapagio’s experience helps to lend SILENT PARTNERS a distinct sense of authenticity. The show is currently being shopped and hopes to air late 2019.  Paul Mormando is represented by Mike Quinn of Silverstone Entertainment USA.