Reportedly, a personal letter penned from the late Tupac Shakur to singer Madonna will no longer be put up for auction. A judge is said to have blocked the item. A spokesperson for Gotta Have Rock and Roll website and Lutz says,

“Madonna and her legal army have taken what we believe to be a completely baseless and meritless action to temporarily halt the sale of Ms. Lutz’s legal property. We believe that her intent is nothing more than to besmirch the good reputations of the auction house and Ms. Lutz. Madonna’s allegations will be vigorously challenged and refuted in a court of law in due course.”

The singer filed an emergency court order Tuesday in NYC to block the website gottahaverockandroll.com from selling the letter and a other personal memorabilia — including personally worn panties.

As previously reported, for years, it had been rumored that the pair had some type of relationship. And this letter,may confirm this. Written while he was in prison, Tupac appears to end their romantic relationship because of her race. He writes,

“For you to be seen with a black man wouldn’t in any way jeopardize your career, if anything it would make you seem that much more open and exciting. But for me at least in my previous perception I felt due to my ‘image’ I would be letting down half of the people who made me what I thought I was. I never meant to hurt you.” 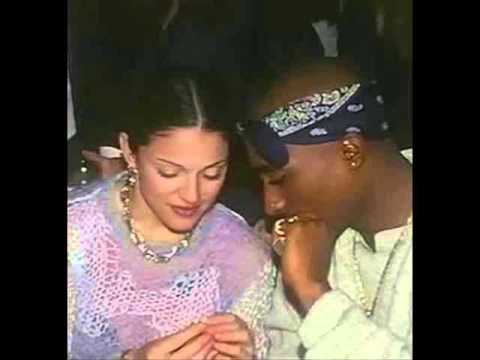 He also hints that some type of disagreement happened between the two, over something that Madonna said about rappers and basketball players in an interview.

“An interview where you said, ‘I’m off to rehabilitate all the rappers and basketball players’ or something to that affect those words cut deep seeing how I had never known you to be with any other rappers besides myself. It was at this moment out of hurt and natural instinct to strike back and defend my heart and ego that I said a lot of things.”

‘Pac says that he still wants to be friends,

“I offer my friendship once again this time much stronger and focused. If you are still interested I would like to further discuss this with you but some of it couldn’t wait. I felt compelled to tell you … just in case anything happened.”

He also warns,
“Please be careful Madonna. Everyone is not as honorable as they seem. There are those whose hearts bleed with envy and evil. They would not hesitate to do you harm! Let my 5 bullets be proof of that!”

Madonna has not opened up to the public about the letter yet.