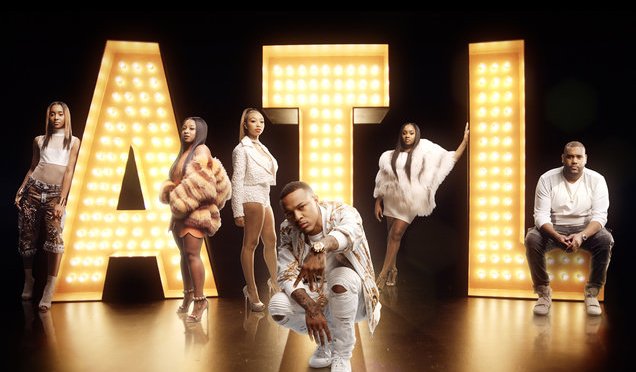 Things Get Heated Up Fast on The Season Premier of Growing Up Hip Hop ATL!

‘Growing Up Hip Hop Atlanta’, premiered on May 25 and Bow Wow caused a stir when he returned home, a place he once left to escape the dangerous drama. However, the real drama unfolded when his enemies showed up to his mix tape party… with guns. I’m still curious to know what went down prior to Bow Wow leaving ATL that has guys heated about him returning to the city.

7 days away until the premiere of #GUHHATL check out this exclusive *sneak peek* its always DRAMA in hip hop. Welcome to the A. May 25th 10pm/9c on @wetv

The first season of GUHHATL had us on the edge of our seat on May 25. We were introduced to the young cast, who all happen to be connected through family, friendships or work.  I will introduce you to all the cast in a few. The premiere was mainly centered on Bow Wow, aka Shad Moss. He’s the only one out of the entire cast that fled the ATL. I’m assuming that could be why people were not so excited about his return.

He claims to have left his hip hop home to escape the messy situations it causes; negative people, drama and dangerous situations. However, now, he’s back. Bow returns to his roots to appear at a party for his mixtape with Soulja Boy.  But, his short stay in the ATL turns into long lectures and conversations with his father-figure and mentor, Jermaine Dupri and his sister-figure and other mentor, Da Brat.

During his visit, Bow goes through the ringer. He tells JD and Brat that he wants to create another album since he hasn’t put out anything since he had his daughter, Shai. He basically wants to create an album of confessions. Although JD and Brat want to work with him, they are hesitant because he lives in LA. So, they gave Bow an ultimatum. Stay in the ATL and make a hit record, or we don’t work with you. But, it was all in love. Brat stated it had been long overdue for Bow Wow to release an album and that him being out in LA away from them, “his family” had kept him distracted. Bow Wow however was unsure because he wants to remain in LA to continue being a full time father for his daughter.

Bow’s weariness about returning to the ATL full time is also due to his life back in LA. He’s admitted that he is not a relationship person. Nonetheless, he’s trying to work things out with his ex, and baby mama, Joie. But, his partying and player ways quickly take over when he touches down in the ATL.

The whole episode leads up to Bow’s mix tape party, where the entire cast is obviously invited and their individual drama unfolds. Bow Wow is celebrating and let’s add that Souljah Boy did not show up at the mix tape party.  So when Bow’s old friends/current enemies show up, things quickly turn bad. He immediately gets his security and makes sure they have their guns on them. Guys are shown walking around with hoodies on throughout his party.  Bow Wow starts making sure that his crew has guns to protect him and themselves and asks for someone to be by the door in case of a shootout.  That’s when the episode ends and I don’t know about you but that left me on the edge of my seat. I’m still trying to see what Bow did to have these former friends showing up with guns.

The season premiere also centers around two best friends, Reginae Carter and Zonnique Pullins. Reginae — the daughter of Lil Wayne — and Zonnique — daughter of T.I. & Tiny — both find themselves entangled in their family’s drama when Wayne and T.I. decide to carry on a fight on social media. Which is a pretty big deal because the family is really close knit.

Long story short, Wayne did an interview where he made some controversial comments about the Black Lives Matter Movement. And, his good friend T.I., who happens to feel very strongly about the BLMM, wasn’t feeling what Wayne had to say.

Side Note: We all remember how that went down so it was interesting seeing it from the other side of the fence.

So, T.I. took to social media to bash him. When their daughters found out, although Reginae bit her tongue, they both agreed to stay out of it for the sake of friendship and family.  However, after a sit down with her mother, Toya Wright, who encourages her to let the beef stay between adults, Reginae can’t contain the urge to protect her father so she snaps back at T.I. on social media. The episode also ends with Zonnique finding out about Reginae’s comments. Things on the show really are heating up in ATL and I’m ready for the next episode!

Bow Wow: Child hip hop star who grew up under the tutelage of Snoop and mega-producer, Jermaine Dupri.

Did you enjoy the season premier? Let me hear your thoughts on the show below.